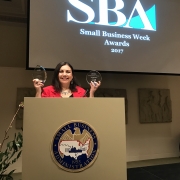 May 3, 2017 (Portland, Oregon) — Carmen Nazario, Founder and President of ELYON International, Inc. was named 2017 8(a) Graduate of the Year at Small Business Administration (SBA) Portland’s Small Business Week Awards Luncheon.  Nazario is a U.S. Army veteran from Puerto Rico.  Her father worked in the newspaper business and she dreamed of one day, touching the lives of others in her own way.

“Life is an adventure and you live a greater adventure when you are willing to take more risks,” reads the legacy in Carmen Nazario’s high school year book.   Though she didn’t have a crystal ball, Carmen’s quote selection would be foretelling of her future.  While attending a university in her native home of Puerto Rico, she decided to take her first big risk. She followed in the footsteps of her father, a World War II Veteran, and joined the U.S. Army, hoping to see the world.  Carmen served as a computer programmer during the Vietnam War; gaining skills that much later would help her establish her own company.  After leaving the Army, she attended school, earned her Bachelor’s degree and worked as an Information Technology professional.

Nearly 20 years later, Carmen took another huge risk.  As a single mother of three she decided to start her own business in the field she knew best, software development and consulting.  Today her company, ELYON International, Inc. has more than 80 employees working across seven states, and serves government and Fortune 500 companies.  In addition to participating in the SBA 8(a) Business Development Program, Nazario grew her business with assistance from the SBA Veteran Business Outreach Center and SCORE counseling.

Each spring the SBA recognizes small businesses across the country during National Small Business Week (NSBW).  2017 winners were recognized during the SBA Portland District’s annual awards luncheon  on May 3 at the Portland Art Museum.